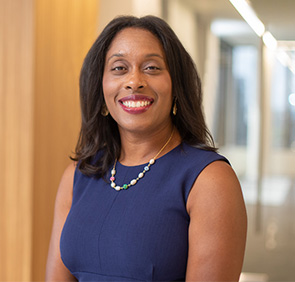 Shana Fulton was all set to attend graduate school for political science, until one of her undergraduate professors changed her mind.

“He wouldn’t give me a letter of recommendation unless it was for law school,” Fulton said. “I hadn’t considered law school before, so that impactful conversation with him was the catalyst for me to change direction.”

When she started law school at Columbia, Fulton assumed she would go into entertainment law, since she had studied piano, flute, and creative writing for several years. However, she found herself drawn to criminal justice and constitutional rights classes, leading her to transition to litigation. She was attracted to advocacy – using her time and energy to argue for just causes and help people in need.

Fulton’s willingness to explore new avenues and be flexible with her career has served her well. Formerly a leading prosecutor in the U.S. Attorney’s Office in Washington, D.C., she moved back to defense upon arriving at Brooks Pierce. She credits the firm for allowing her to explore both criminal and civil litigation at the same time.

“I feel like I can be a complete lawyer, allowed to think outside the box. A lot of firms won’t let you practice both criminal and civil litigation, but most of my cases are intersections of criminal and civil, particularly with investigations. I can’t imagine practicing law without considering both,” Fulton said.

Fulton’s well-rounded experience also gives her a unique insight into the opposing party’s possible strategy which can be highly beneficial to a client.

She enjoys being able to use all of her experience to solve complex problems for her clients and provide thorough counsel in times of crisis. “I love being able to help people when they really need the help. It’s truly rewarding to try to help our clients to a better place than when I first met them.”